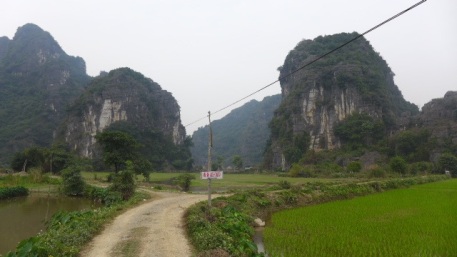 At the other end of the Halong Bay geologic formation the Karst towers of Ninh Bin erupt out of rice paddies rather than the ocean, but the image is still iconic. The 6-hour journey is ample time to reflect on the ticketing agent’s parting comment “be careful where you get off the bus madam, your hotel will be nowhere near Ninh Bin” – shades of Burma? it is clearly called the ‘Ninh Bin Valley Homestay’. But no sooner have we pulled into Tam Coc (Nam Coc? it’s not on the map) I am hauled off the bus by a rather severe young lady with a clip board, and after a quick phone call with no input from me settled in a pick-up truck apparently en route to NBV-H, which turns out to be nowhere near anywhere at all, let alone Ninh Bin. 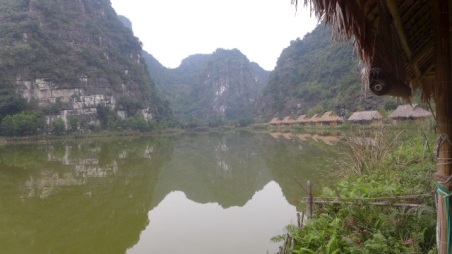 NBV-H is located beside a lake at the very end of the very furthest rice paddy in a narrow valley hemmed in by Karst towers that are populated by a herd of goats desperately and unsuccessfully attempting to answer their hormonal drive to mate (evidently the herd doesn’t contain any males) and so is somewhat noisier than its bucolic setting might suggest (thankfully management acquires a male goat next morning, which calms everything down somewhat once he is released into the mountains). NBV-H accommodations don’t disappoint – bamboo huts, each with its own lakeside terrace, jaunty hammock and mosquito net over the bed because there is no glass in the windows and the walls leak like a sieve. Its single shortcoming is that it is so remote from the elusive Ninh Bin (and everywhere else) and the road between the rice paddies is so narrow, it would be positively dangerous to venture out once the sun has set, leaving us at the mercy of the spectacularly untalented on-site chef. The two millenials who appear to run the establishment are cheerfully unapologetic about the menu’s many failings until they sense a revolt is afoot, then they try to mollify us with the promise of a goat barbeque, which (maybe unsurprisingly) is a specialty of the region. 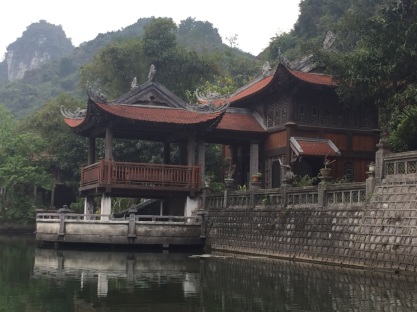 Bright and early after breakfast I steer my bike through the mist rising off the rice paddies further into the Karst to the Na Trang river. Na Trang is a well-kept secret, advertised only in Vietnamese and unlike the more touristy and apparently meager 1 hour boat ride out of Tam Coc, is a 4-hour tour that traverses no fewer than 9 caves.  Most of the few other tourists are Vietnamese so I endeavor to elbow my way onto the only other boat with Westerners – Chelsea from Cedar Rapids, Mike from South Dakota and his Vietnamese guide Xum (in response to my inquiry as to whether this is his first trip to Vietnam, Mike replies ‘Oh no I’ve been coming here since 1969’). 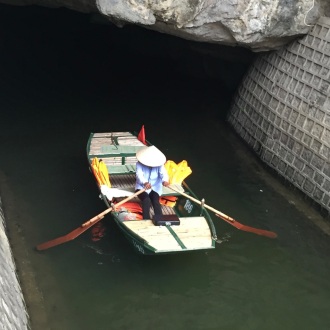 We are under the command of a dowager equally adept at rowing with her hands or her feet, which comes in useful since each of the 9 caves has only one feasible route which she must navigate to within an inch of her life, while the ceiling lowers and plunges around us. Thank goodness for Xum who can translate her indistinct murmuring as ‘Duck! Now!’ enabling us to prostrate ourselves hastily on the bottom of the boat (our dowager is so much tinier she doesn’t have to). 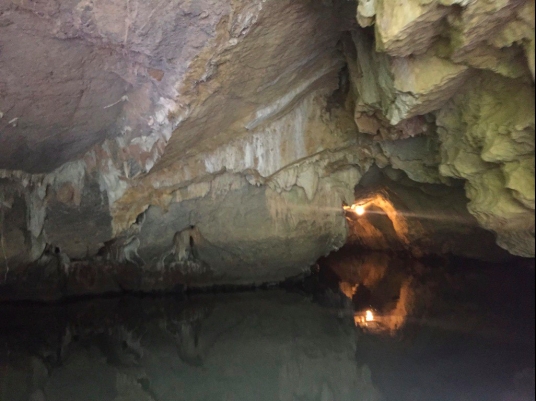 On the way back, I notice that dead goats have materialized for sale beside the road. Every single one looks as though it has fallen off a mountain and lain in the heat for several days. Even the vaguely sketchy guys selling them look a bit embarrassed. I’m only slightly sorry I’ll miss the goat barbecue, the day after I leave.