Checkered demographics on flight 5671 Novosibirsk to Yakutsk: A few pale ‘n pasty Russians, the rest stoic Sakahs, the Turkic indigenous majority in Yakutia, and the continually belligerent Tajik and Kyrgiz (miners I suppose) To a man (there are few women) they have spent the weekend partying hard in Novosibirsk. About half have brought the party back to the airport while the rest are already regretting the whole adventure. The exasperated flight attendants who have seen it all before strongly encourage us to stock up with paper bags. In the event the flight is subdued, if not entirely sober. The buckwheat at dinner sops up any circulating alcohol, while stern PSAs continually remind us it is against the law to replenish it with any we might have sneaked on board. In the absence of in-flight entertainment (except the interminable queue for the toilet) and with the lights firmly doused, the only recourse for my fellow passengers is sleep. We set off at 11:00pm and are supposed to arrive at 6:00 but the time changes so often (three times, including, apparently once backwards) it is impossible to keep track.

Party time at Novosibirsk airport. There is no Guinness, only vodka

I do not sleep (I will regret it later). The sight is staggering. Ten minutes outside of Novosibirsk the lights end and for a full 3 hours under the bright night sky the marshy taiga of southern Yakutia shows no evidence at all of human habitation. Only at the central plains do clusters of lights appear, maybe once every 15 minutes, tracing the rivers. There is only one road and it’s not here, so communication is by water – in the summer by boat and in the winter on ice roads (more about ice roads later). Only a million people dispersed over an area 5 times the size of Europe. Fully a third of them huddled in Yakutsk where it is barely dawn and fortunately -37°C (below -45°C the frozen mist presently hugging the ground and making us gasp as we inhale, becomes pervasive and the plane would have difficulty landing). Eventually the key to the terminal is located, and I barely avoid my first acute hypothermic emergency. My fellow pickled passengers aren’t even bothering with gloves.

Two four hour flights get us to the heart of Yakutia

Alex, my driver, is half Sakah and half Russian. We can tell he is not fully Sakah because, in his own words, he is pale, tall and fat, and also not pigeon-toed. On inspection he is quite correct, the Sakah are small, dark and stocky and invariably pigeon-toed. Alex is also a shamanist. He is evasive about what that spiritual practice entails but it may include being surly around babushkas. We set off immediately because today we must cover 400km east into the taiga, crossing three rivers on ice roads to reach our overnight stop in Khandyga, and tomorrow a further 400km north on a road that doesn’t seem to appear on any map (there are actually no road maps of Yakutia) to reach the nearest gulags. I trust we will manage to arrive back for the train out of Yakutsk, which goes only once a week, on Thursday morning. Still, because the roads that are not ice are built on permafrost, they cannot be paved, and I am happy to trade Alex’s skills as a driver for his defects in the small talk department; in the end he will get an upgrade to merely shy.

Alex tells me the ribbons indicate trees that are important to Shamanists. He won’t tell me for what.

Dawn over the ice roads across the River Lena from Yakutsk to where we are going first. The river banks are almost out of sight, but that is going to be OK because this is the  official road: water is constantly poured on it to make sure the ice stays 50cm thick, which doesn’t seem too thick to me.

Where we are going first is Cafe Nal. Its main claim to fame is a ‘hot toilet’. Not having to pee in temperatures approaching -40° is a major preoccupation.

Sakahs eat the same food at breakfast, lunch and dinner, which means they only have to cook once a day or even less. Alcohol is never available.

No trip would be complete without a stop at an ethnographic museum. Since it is closed for the winter the security guard, Andrej, is deputized to deconstruct every tool on display for my benefit. He is very happy to oblige.

Andrej waits impatiently to explain how ancient Sakah tepees are made from pliant Siberian larch (I assume). 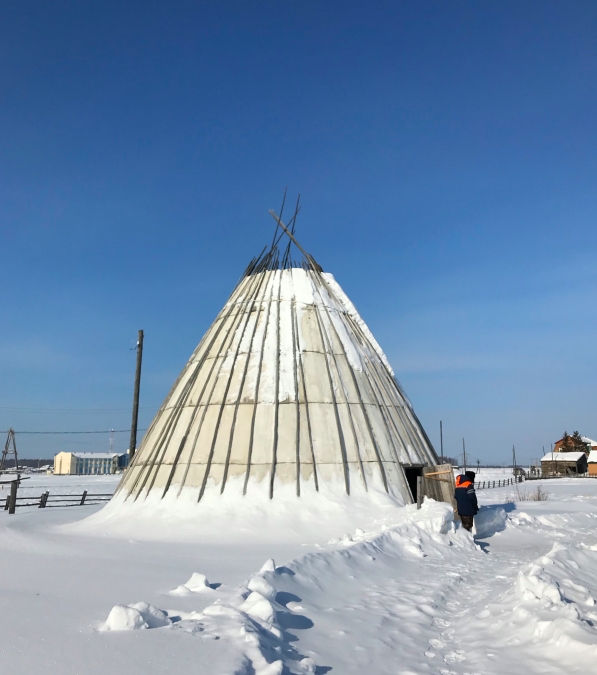 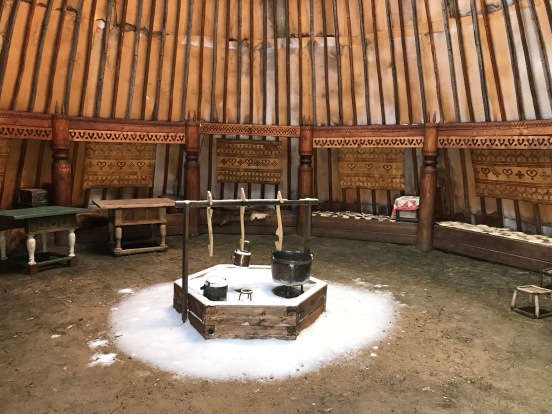 Unexpectedly, mud houses. The frozen walls provide insulation, like an igloo. This idea went out of fashion rather quickly except for the Shaman whose house this was. 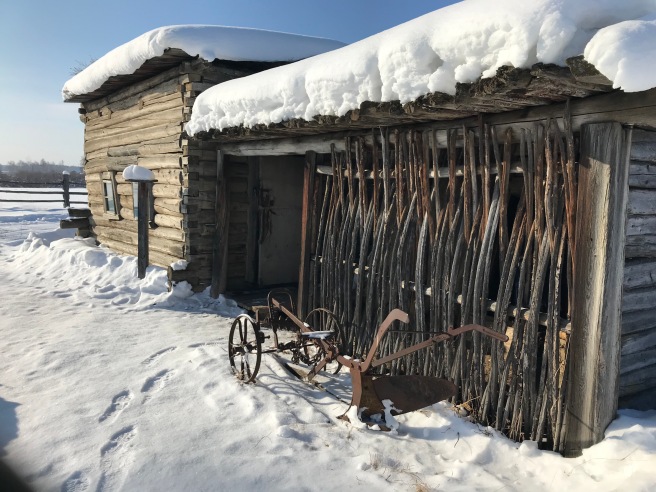 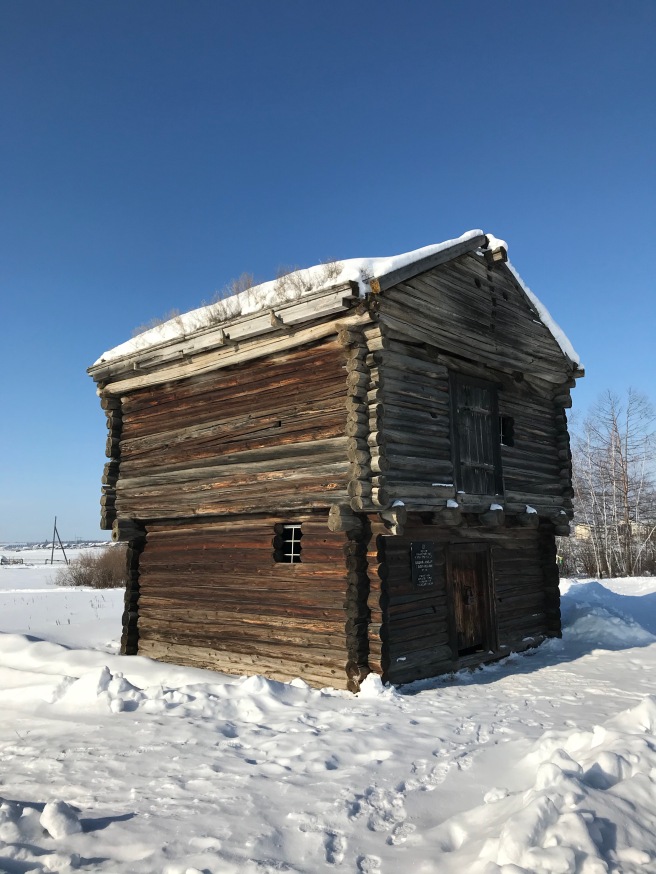 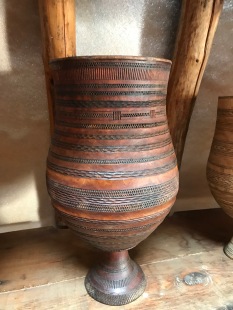 Next, Alex is excited to show me the work of a local sculptor whose medium, rather originally, is frozen horse shit.

The horses in question live outside winter and summer. They eat the grass through the snow and also bury their noses in the snow to sleep, like the one at the front.

After 400km including 3 more ice roads we arrive at Khandgye. The whole village’s heat comes from a coal power plant and is circulated round the streets in colossal pipes.

My part also doubles as a sauna 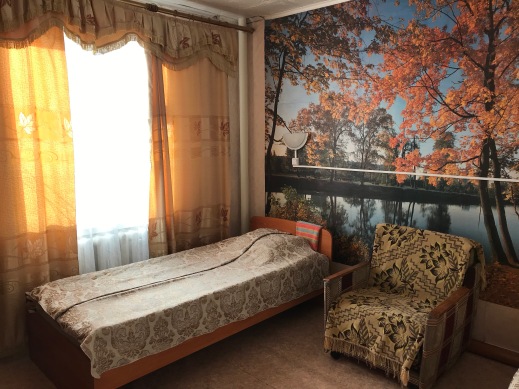 But we eat dinner and breakfast (shown) at the best restaurant in town.

After 8 hours we are half way there.

One thought on “Well Z’drasty* Yakutia”