On inspection the 001 ‘Rossiya’ train (originating in Vladivostok and ending up in Moscow) is not the 5-star luxury model I anticipated (that turns out to be the 003), but on closer inspection this is even better: First my convivial companion, Natasha, a GT whiz, organizes both our shared breakfast and a substantial conversational duel.

I’m sorry Natasha gets off at the first stop; she’s sorry she can’t persuade me to get off too.

Second we have the best kind of Prodnitsa, an energizer bunny who spends her time vacuuming, polishing and keeping the bathroom in tip-top condition along with deploying spectacular air freshener.

Maybe the train isn’t 5-star, but the Prodnitsa is.

Third, the kitchen shows up, not with the usual greasy pastries, but with ice-cream.

Vanilla or pistachio, the texture is a bit suspect but looking out the window while eating ice cream can’t be beat.

Finally once Natasha gets off I have the compartment to myself for a whole 24 hours.

A room of my own 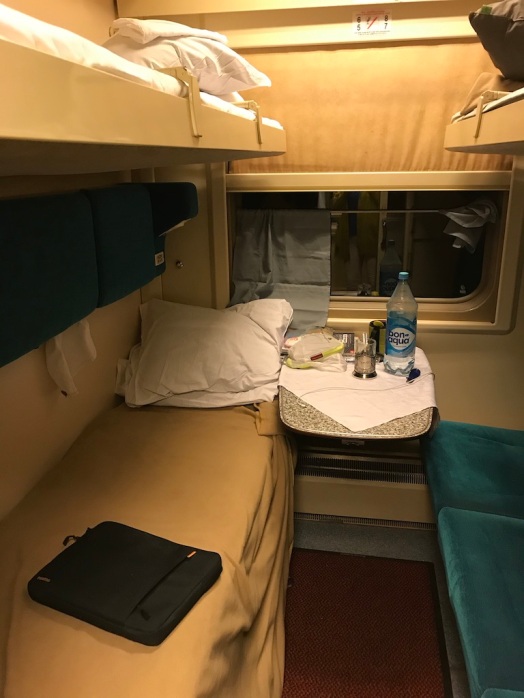 The snow has melted and the dense taiga clears out 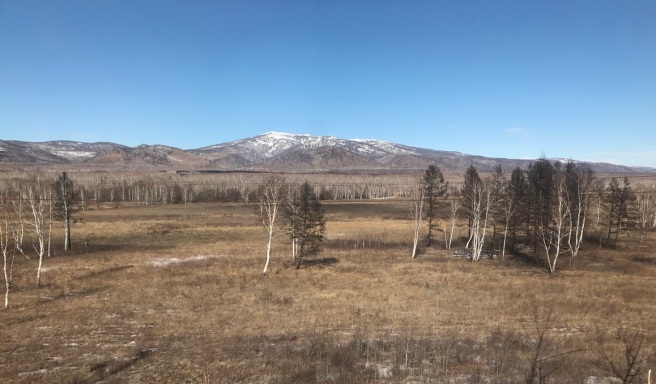 The snuggling villages strung out beside the train track might be beginning to wake up for the spring.

At the start occasional cars are still cruising the ice-roads

But by the end of the day the 2020 ice roads are becoming a thing of the past. 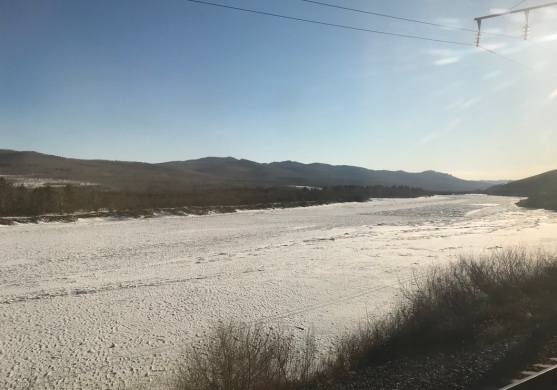 Here to meet me at the train station is Darima, my guide for the day (can’t believe I don’t get a photo of her) and yet another Alexey, this one infinitely less dour, who will drive us to Tarbagatai, an Old Believer outpost south of town, closer to the Mongolian border.

The Old Believer sect split with the Russian Orthodox in the 1600s after some dispute (as I understand it) about whether it is more appropriate to cross oneself with 2 fingers extended (RO) or 3 (OB). Not surprisingly this catastrophic schism resulted in significant persecution and the OB had to flee for their lives, this particular branch ending up in Siberia. Not surprisingly also they are still carrying the grudge (as told to me by Darima, a Buryat [the indigenous majority here] Buddhist who has no skin in this particular game).

First stop though a monument marking an ancient Xiongnu town (3BCE). Recall from last year how the continual Xiongnu harassment of the Han Chinese led to construction of the (ineffectual) Great Wall. This evidence of the northernmost extent of the Xiongnu empire is totally unexpected, and very satisfying.

As usual all the artifacts associated with the site have long been removed. More unusually they are in St. Petersburg rather than London or Berlin. 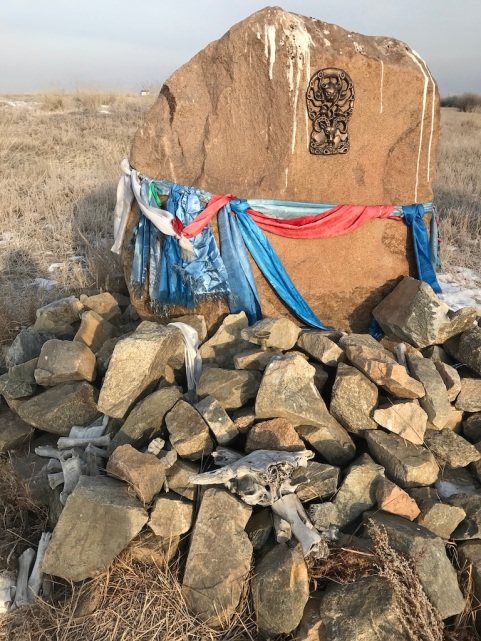 A quick climb. We don’t go to the actual summit because it’s a holy mountain for Shamanists and in any case we are women. Darima tells me how, during the Great Patriotic War (WWII to you) Stalin called on Shamans and famous Tibetan Buddhist Lamas from the Ulan Ude area to make spells so the winter of 1941 would be cold; in fact it was the coldest winter of the century and the Germans were prevented from taking Moscow. As a result Stalin forbore to persecute those religions here. “Do you believe that?” I ask. Darima comes from a long line of Buryat Buddhist Lamas “Yes of course” she says firmly.

From the other side,  the vast Selenga river with Ulan Ude barely visible at the far bend.

Once in Tarbagatai first stop is the museum run by the local priest – an ‘unofficial’ archeologist who brings the mammoth and other prehistoric bones he finds here rather than to the official state repository in Yakutsk. 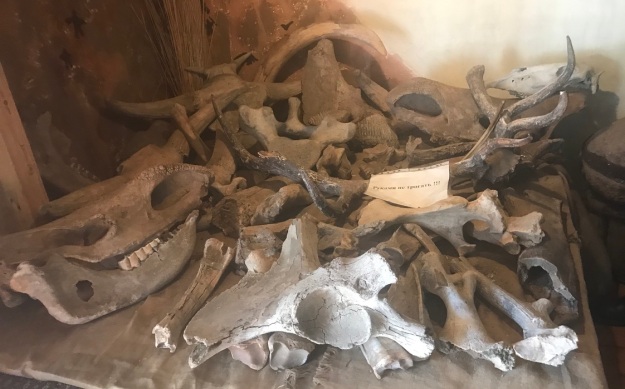 It seems like every clearout is dumped in the museum

The ancient handwritten texts are slowly succumbing to the inappropriate cold and damp. 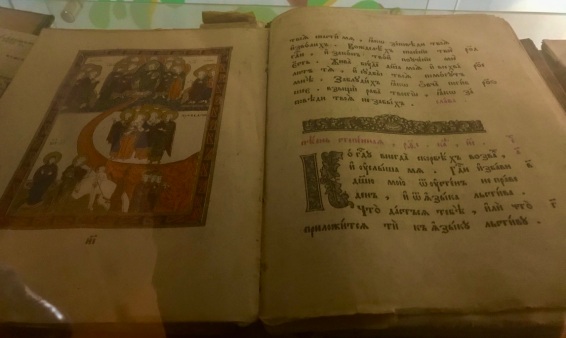 Off to the church, no interior photos please. 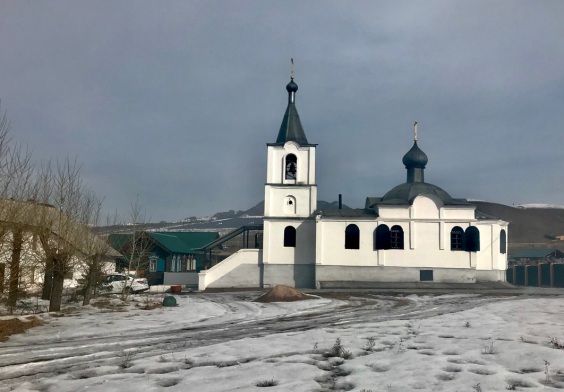 Sasha, the priest’s son, is caretaker of the museum and the church.

(Darima herself has a PhD in philology and is both highly educated and very well read. We have had several thorough conversations on the politics of pandemics already).

I swing into didactic mode: Quick overview of viruses. Explanation of mutations and natural selection. Infectivity, contagion, and the death rate. All perfectly calibrated for a religious fanatic who probably doesn’t believe in evolution. Rather a tour de force I tell myself smugly.

Sasha: What a load of nonsense. Everybody knows pork fat and garlic cures everything.

Me: Can we at least get soap and water into the mix?

Time for lunch. When Dusia’s husband died she proposed making lunch for tourists as a way of bringing in income. At first her neighbors objected strongly. Now they all want in on the action. It is the only way to visit the village. Dusia’s homestead is entirely self-sufficient, and she manages it all herself; her daughters only come to help for the hay season.

The hayloft at the homestead. 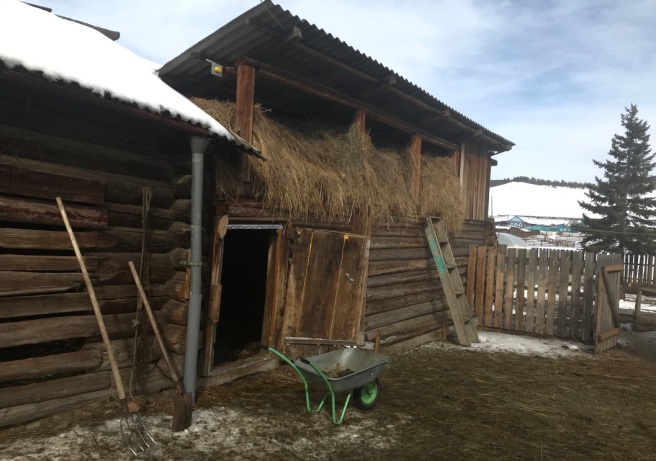 Make no mistake this is a nasty-ass dog.

Dusia is a really delightful, naturally hospitable person and a good time and lunch is had by Darima and Alexey and especially by me.

Lunch is all home-raised and home-made. Even the potatoes drenched in home-made butter are the most perfect version of potatoes and butter.

Dusia is famous for her baking. Ethereal carrot piroshkis at the front then rice pudding and lingonberry tart at the back. The rice is not home-raised but a traditional treat for guests. Not shown, the less-than ethereal home-made vodka.

After a couple of glasses Dusia and her friend are ready for some after lunch entertainment. 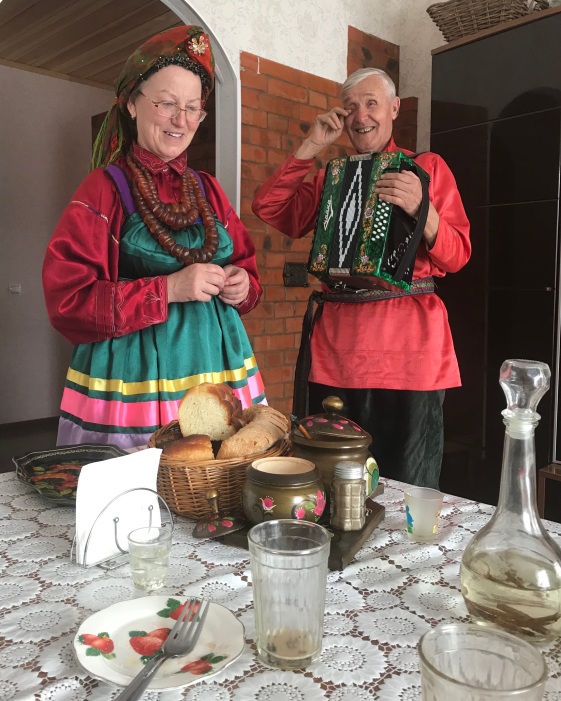 Then, back to Ulan Ude to the Maryusa ‘Boutique’ Hotel.

The nosy ladies of the hotel are also Buryat (the Buryat language sounds like a hyperventilating bee) but don’t speak any English or, it seems, Russian. This does not stop them hauling themselves up the stairs and parking themselves outside my room whenever they hear me speaking English inside, such as Skyping with Jim. Occasionally they will create a lame pretext so they can check I am alone.

In the end they confess to being worried about me since I am clearly way too eccentric to be on my own. 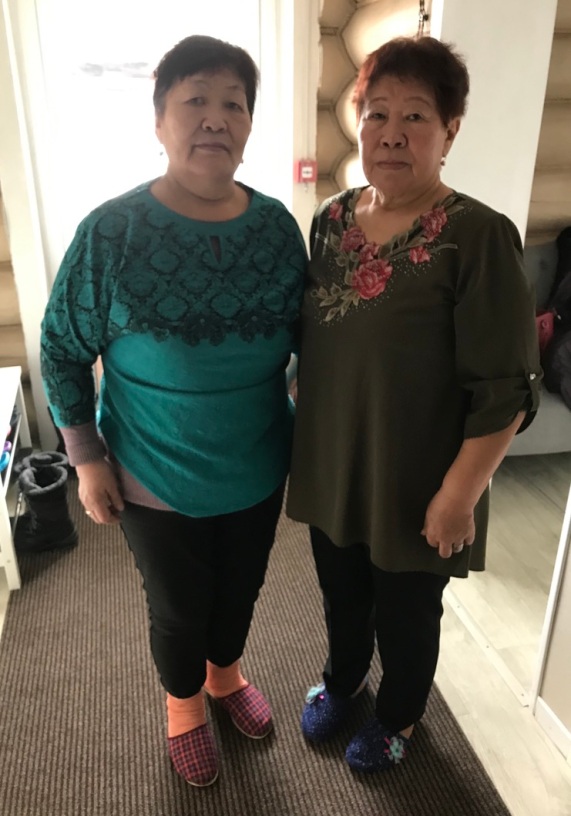 My second religious experience is at the Orthodox cathedral. I am drawn inside by  wonderful polyphonic singing. Despite the sparse attendance the liturgy is quite energetic: First, the two babushkas front and right provide the polyphony punctuated with monotonic recitations. Second, the illuminated doors up front occasionally open and a priest momentarily joins in. Third, this is the cue for more of an audience to emerge from nooks and crannies like the shop, and prostrate themselves; they disappear back once the priest goes back inside. Finally one of the front-and-right babushkas comes down the central aisle and bashes me nastily with her walking stick evidently because I have crossed my legs.

The stolen photo is not ideal.

The rest of Ulan Ude is small and quite delightful in the spring thaw.

Delicate fretwork in the old part of town.

Lenin’s head (to celebrate his centenary in 1970) occupies pride of place. 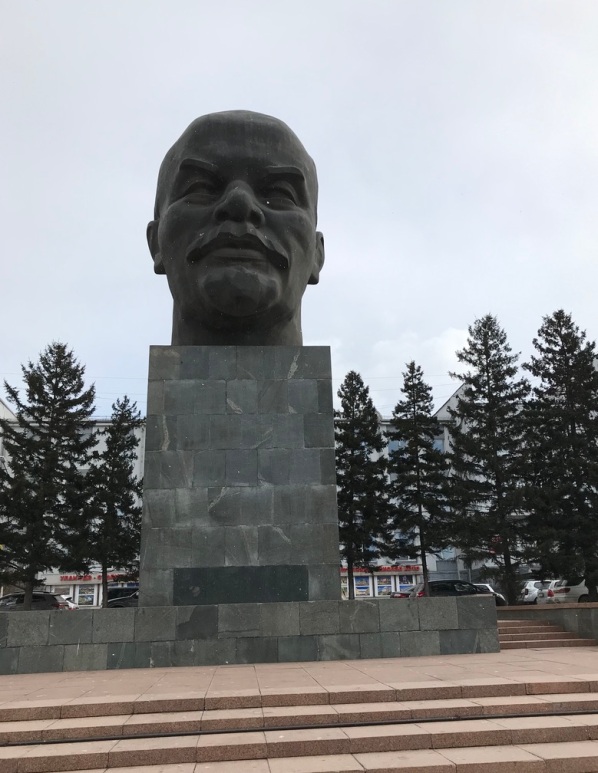 According to Darima, Ulan Ude Russians are direct descendants of gulag survivors, both political prisoners and actual criminals. This results in a population with the killer combo of being both unusually smart and not inclined to pay attention to the Moscow government. 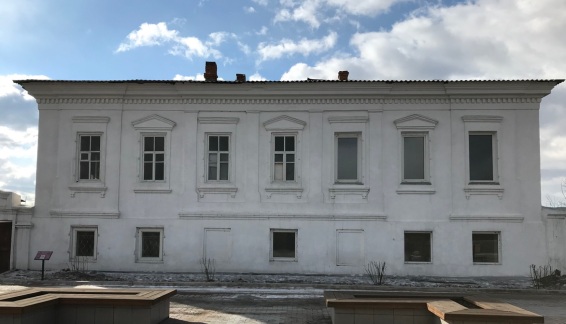 Round the back, an actual gulag monument. 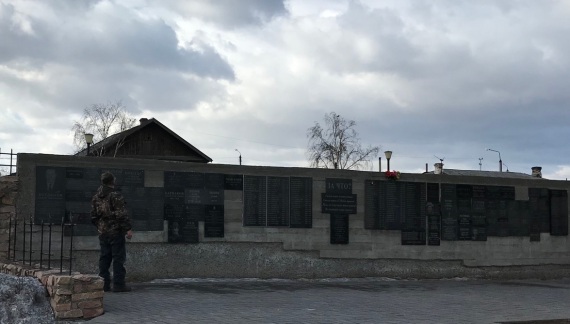 Some made it, but most didn’t. Many, I suspect, are still not accounted for 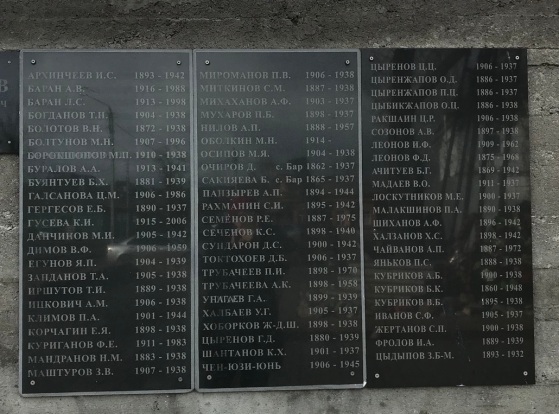 A satisfying lunch at the best dumpling place in town.

In the afternoon my third religious experience requires taking two mashrutkas (minibuses) into the hinterland. The Ivolginsky Datsan Buddhist temple was allowed to open in 1945 by a grateful Stalin (see above) and is the home of the leader of all Russian lamas.

Mashrutka life, these two likely lads had been having a good time long before they got on board. 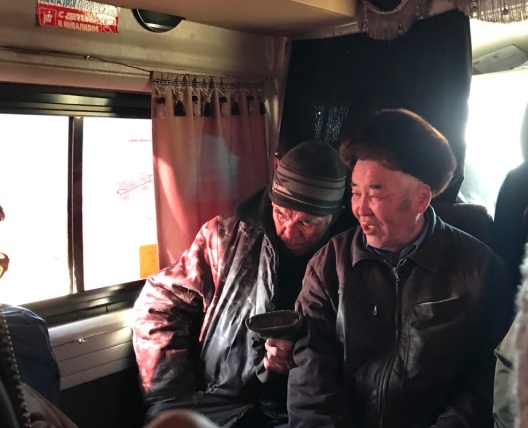 The hinterland steppe on the way to the temple.

The temples are done out to be pretty traditional despite being relatively new.

Stolen inside pictures. Not shown, the ‘naturally’ mummified body of the original lama, who was buried without being mummified, but then found to be remarkably preserved when he was dug up for some reason.

On the way back I chat a bit with the lady on the right who is visiting the temple with her mom. The second mashrutka is packed and we don’t talk further, but all get off together at the last stop. The younger lady presses a gift into my hand  “For friendship and peace” she says as she leaves. When I open it in my room she has given me a Tibetan prayer flag and a 1000 ruble note. I am shocked. She is a teacher and I doubt she earns more than 7000 rubles a month. I have no idea of her name, and no-one can offer an explanation for this incredible gesture,

The last tourist in Russia

The half-empty train to Novosibirsk. “Well who are you?” asks Anton, throwing his bag onto the place opposite mine. “I think you must be the last tourist in Russia”. And so my last train ride in Russia upends yet another stereotype. Because the entirely unprepossessing Anton, despite a couple of alarming tattoos and questionable taste in train T shirts, turns out to (a) speak perfect colloquial English (b) be extremely thoughtful and very well read and most importantly (c) be a foodie and insistent to share his excellently curated meals. And so we spend the next day and a half in fascinating conversation that covers all the interesting Russian topics – the economy (the sanctions have protected Russia from a global recession – yes I heard it here first);  Putin (two thumbs down); anti-American propaganda (is it true Americans are so fat they have to travel around in golf carts); and  at one point, a sotto voce discussion on state surveillance that prompts him to bury his phone in his duffle.

I insist on a smile for the photo. “You don’t understand” he says, “Russians are angry people who are deeply suspicious of each other”. And he grins. 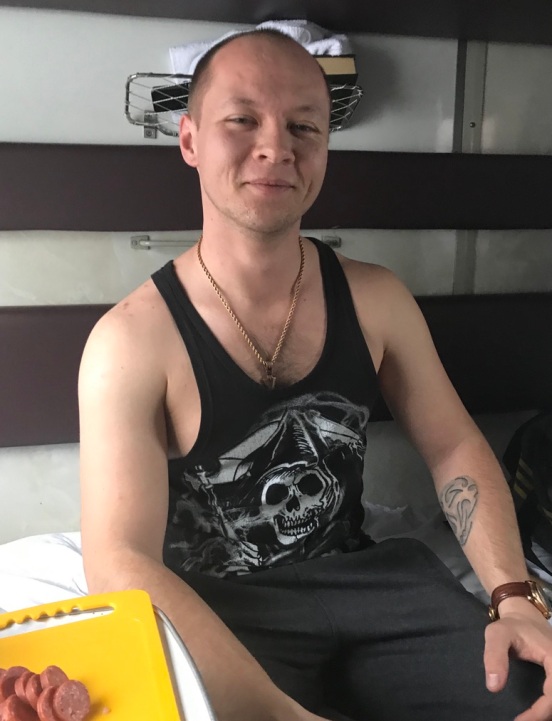 When I get off he carries my bags onto the platform, gives me a hug and makes me promise that when I come to Siberia again I will look him up and stay with his mom and dad.