Why reinvent the wheel? Let’s hear first from Colin, who’s so much more eloquent than me:

‘For three hundred miles the road bends north west to Kashgar. The sands lap against it, but gently now, and the oases multiply and start to merge. You go through towns of venerable decay, past the sleepy Islam of 19th century travelers, of cemeteries disintegrating in solitude for a Sunday sketchbook. To the west the horizon glitters into life as the Pamir foothills trace wavering lines of forest and the peaks beyond them fracture the sky with an unearthly brilliance. Here the desert at last ends and China is petering out. For a long time, as the road veers harder north, the mountains float above Central Asia in a stupendous punctuation mark.’

Over the Tian Shens west to Kashgar, I was exactly on the other side in Kyrgyzstan last year. The train journey from Ururmqi takes 22 hours, it didn’t seem necessary to do it in both directions.

Yet another $25 score at another Uighur extravaganza, the newly renovated Nurlan Hotel, previously known to everyone (but now only to the taxi drivers) as the Sultan.

At the confluence of three important Silk Road routes – through the Pamirs to Afghanistan, down to the Indian subcontinent and off over the Tien Shan towards Uzbekistan, Kashgar was always the place to kick back and relax before confronting yet more extortionist nomads. It is a shadow of its former self.

Unstoppable force meets immovable object in uneasy coexistence. The mosque is the largest in China. 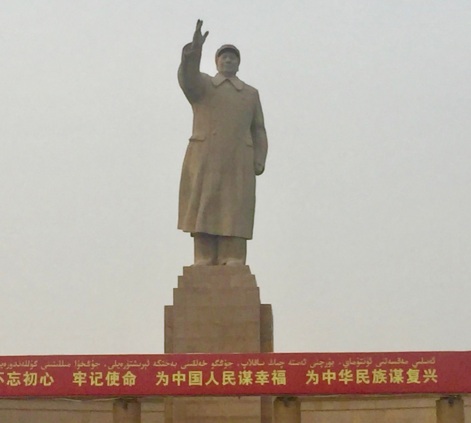 Delighted though that its camel has the necessary ladder

I am the only Westerner in town. I know this because many friendly people have sought me out to tell me; in fact in most cases they first had to seek someone else out to tell me in their stead. While this has had some advantages (the price of my evening ice-cream steadily declines to zero) it has not alleviated any of the problems with being here, but planning to go elsewhere.

Tashkurgan, 7 hours up the Karakoram Highway, is the putative site of the Stone Tower, where caravans from east and west would exchange merchandise; no one caravan traveling the whole route. It has been on the bucket list for years But no! just last week the rules changed. Now I am only allowed to leave town accompanied by a tour operator (town is defined rather loosely but seems not to include any significant sights). I am not allowed to join an (inexpensive) Chinese tour (if they even exist, there don’t seem to be any Chinese tourists either). I can go with a licensed Uighur tour operator provided we have both a guide and a driver (this seems overkill for what is essentially a trip straight up a 4 lane highway, but what do I know). I reluctantly justify the considerable expense ($250) to myself but alas my putative tour operator should have submitted the permit paperwork a week in advance (it seems churlish to point out the rules were different then). The only option seems to be ignore them and go by myself.

To the hopeful rescue comes (let’s call him Otis Redding since he is paranoid and this will be posted). Like Urmat last year, O’s satisfied clientele pass his name through the bowels of the internet like a talisman.

O is not his actual nom de guerre (his actual one is even more ridiculous) but it seems wise to be a little circumspect. When I ask ‘Why Otis?’ he reminds me of the lauded ‘John’s Cafe’ (now defunct). Tourists flocked there not expecting ‘John’ to be Chinese. Our guy thought he could go one better until someone pointed out that even though Jesus is indeed more famous than John, using that name would be unlikely to attract the type of clientele he had in mind. So it was onto plan B or rather, plan O.

Against his better instincts (I will come to realize O is a fretter) we will confront the dragon in his lair, namely the permit office itself. The mild-mannered permit officer exudes sympathy but cannot be convinced. I am not allowed to simply take the public bus to Tashkurgan, stay the night and return the next day (it is 7 hours away). For one thing the hotel can’t take foreigners (despite having given me a reservation). For another the checkpoint at Karakul lake (4 hours away) will want to see my permit, and in its absence I will be returned post haste. The permit officer would like O to recall that no public transport stops at Karakul lake on its way back to Kashgar, and also that I am not allowed to hitch hike. It all seems a bit much and O feels my pain (he’s not allowed to travel to Tashkurgan, which is a Tajik town, either). Not to worry though, he will dedicate himself to showing me the sights, significant or not.

First we must establish our rules of engagement. Initially O. simply deflects my indiscreet political questions with a slight shudder and a bright ‘Let’s not go there’ but eventually he just positions himself out of camera range to answer (a not insignificant task). By dinner on the second day he’s dishing the dirt on everything.

The buildings in the bazaar area have been torn down and replaced with (excellent) facsimiles. There is indoor plumbing and no outdoor smell. The previous homeowners were given either a renovated house or money.  Many of the new inhabitants work for the ‘Government’. O raises his eyebrows slightly “like your East Germans” – recalling our previous conversation on neighborly surveillance.

All the festering old parts are being renovated for better or worse. 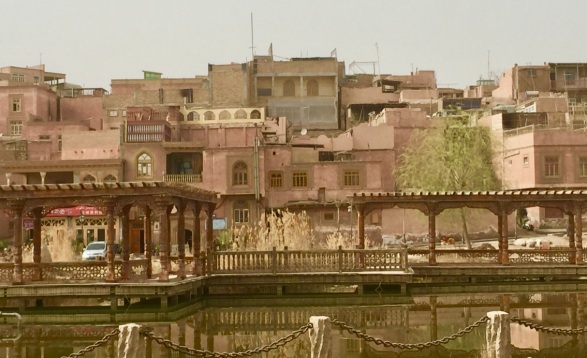 Next year, coming to a slum near you. 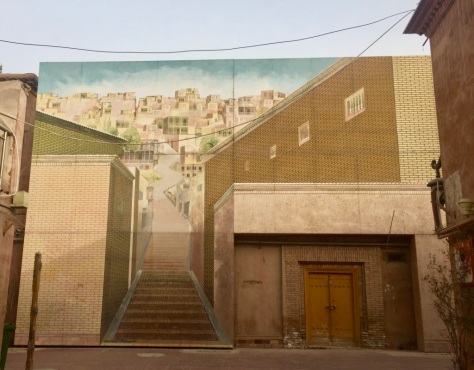 Checking out the merchandise on the main street 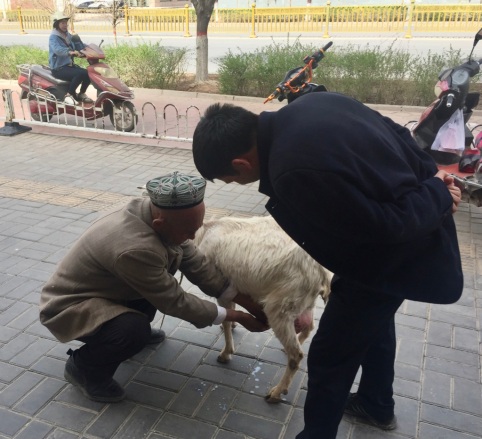 Check out his coloring

Not in the running for China’s largest mosque

Besides its notable photogenicity there is even more to the bazaar than the omnipresent cameras and neighborhood snitches. Pairs of pseudo-tourists with sunglasses and day-packs are settled here and there (since there are no actual tourists they stick out like a sore thumb; it is not clear what they are supposed to be doing). Nonetheless O forbids a snap and we give them a wide berth. Being able to identify them will come in handy later.

O considers himself a foodie and in the absence of anything much to see he dedicates himself to showing me the local cuisine (for less than a dollar a dish). It isn’t, as I first imagined, simply noodles, its just that O eats the very same things every day: noodle soup with apricots for breakfast (I manage to avoid this meal) noodle soup and stewed baby pigeon for lunch (delicious actually) and more noodles for dinner; I once insist on a salad and the whole kitchen comes out to object. Dessert, once I send O packing, is ice-cream at the night market.

Noodles galore, unfortunately this is the extent of the vegetable options. 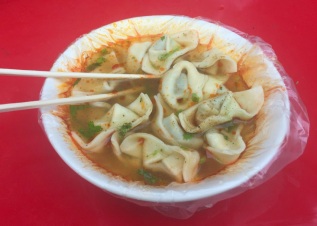 Madame of the pigeons, and her pigeons, each restaurant prepares only one dish. No utensils. 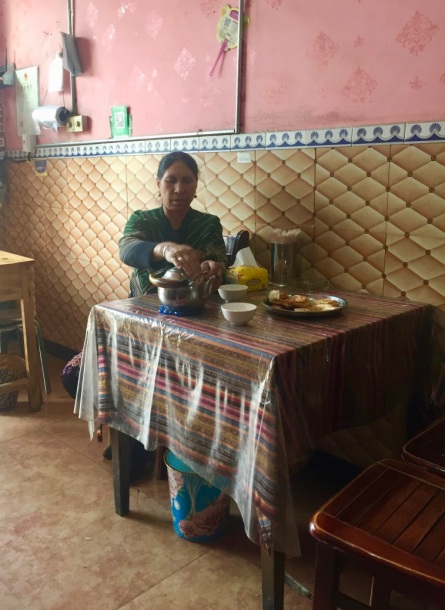 It turns out there are two legitimate Lonely Planet-endorsed sites in Kashgar after all –  the Sunday animal market is considered ‘in town’ despite being 40 km away and is therefore accessible to me as well as the many Chinese tourists who finally materialize on Saturday night. 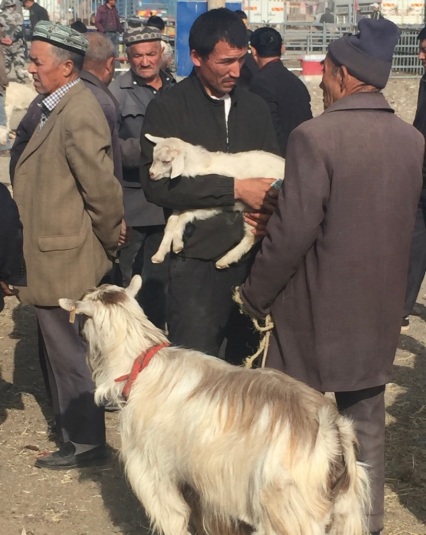 The deal is done

And off we go

Lunch at the market – at least the meat is guaranteed fresh

The likely lassies dress up for the Chinese tourists. O wheedles me a snap for free 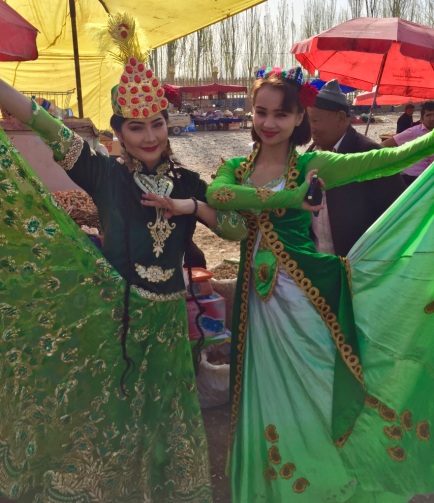 The second site is the grave of the prominent Uighur poet and scholar Yusuf Has Hajib. O is outraged that the taxi driver claims never to have heard of it, but when we find it shuttered and ringed with razor wire and anti-terrorist barricades, he blanches and we make a hasty retreat (definitely no photos).

Sheep’s feet – the final frontier, like chicken feet but better

Our quest for sheep’s feet as a last dinner celebration has been accomplished handily and I am headed for a cab, when we are accosted noisily from behind by a couple of teenage boys for a selfie. I am a bit startled (on-the-street demeanor is normally hyper-decorous) but O is distraught. He is convinced this means surveillance (he doesn’t even own his own computer he is so paranoid). To make matters worse he claims to spot the same two at the animal market next day (really unlikely since those ones seemed about 14, and these ones are adults milking goats, but again what do I know). O won’t be shaken and fret descends into gloom.

O.’s explanation of this building in the bazaar is that the fencing is to stop the troublemakers getting out.

This photo will be posted once I’m out of the VPN zone.

Later, at the station, as my entire luggage is deconstructed, they would like me to justify not one but 4 Uighur cookbooks. (O. has instructed me to take two of them to the new Uighur restaurant in Cambridge so I can worm my way into their good graces and hopefully be fed for free). As usual GT fails miserably at this task and my passport is photographed yet again.

2 thoughts on “Kashgar’s wild (and woolly)”