But before we start, a 10 day (or was it 12) spin around Tunisia with Jim and the crew from Iran a couple of years ago. A most convivial crowd of old friends and new. We have a blast and manage to leave exactly a day before the actual blast caused by a couple of folks blowing themselves up outside the US embassy.

Poor Tunisia! the only functioning democracy in North Africa has managed to elect itself a repressive government with corruption that has bled the country dry. Those who can have fled, leaving behind an overwhelming aura of opportunities not developed or taken and a population barely able to control their frustration. Hence, no doubt, our suicide-vest friends aided and abetted by Isis who are camped out in the mountains on the border with Algeria.

But all is not lost! Tunisia can’t compete with Morocco in neither the glamour of its decor nor the sophistication of its cuisine but does win the following categories:

World class Roman ruins, open for clambering, at every turn.

On the right, not tourists but the Serbian Tourist office, shooting a promotional film with Serbian gladiators and slaves, in Serbian of course.

With world class mosaics on every wall: 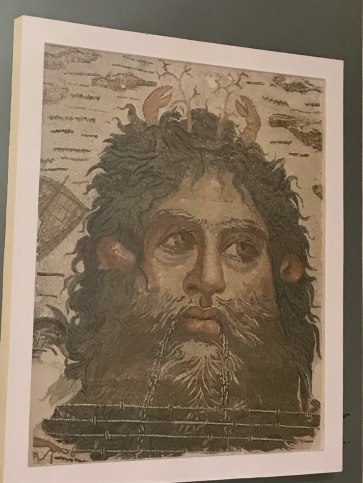 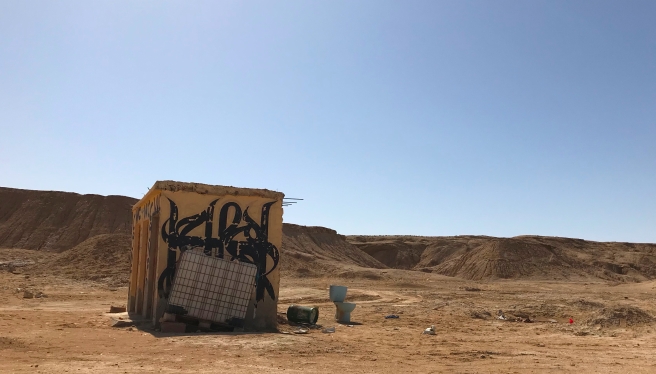 We visit all the Star Wars sites, of which I’m led to believe this is one 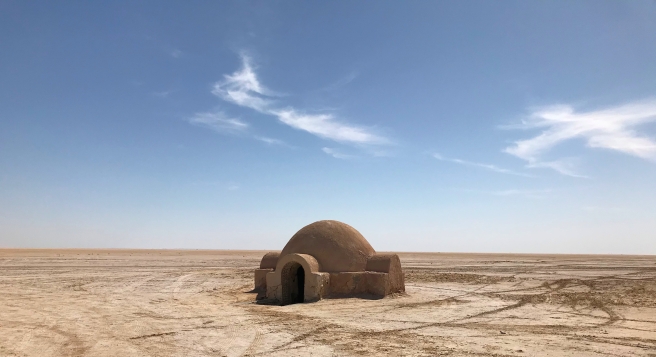 For some Star Wars cosplay, of course. 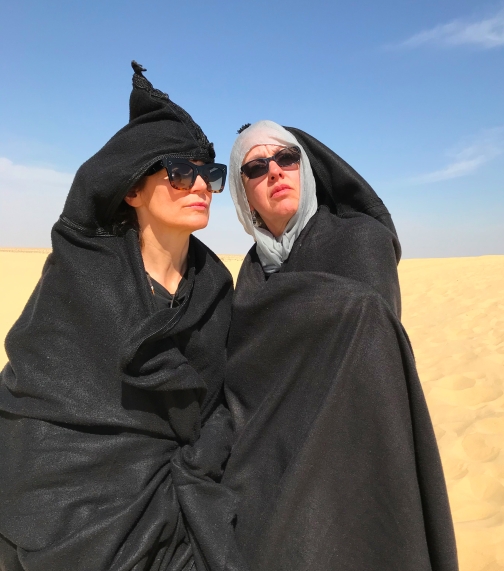 Then a quick sayonara at the usual place in Heathrow Airport

And I’m On the Road Again!

There is no snow in Moscow

And what’s more there evidently hasn’t been in living memory. On the Metro, where most folks are cradling huge bouquets of tulips, my T.J. Maxx polar outfit generates some serious side-eye, but nonetheless the usual relay team of anonymous nice young men (NYM) ensure I don’t have to carry anything up any of the stairs from the airport to the Metro exit, where the usual despicable babushkas greet my return with barely concealed derision.

Fortunately last year’s effusive review has apparently earned me an upgrade into a huger room than I could reasonably expect for the price, with not one but two free bottles of water and more importantly enough bars of soap to accompany me and my reviled polar gear to Siberia (more on this later). I take myself off to the cafeteria up the road and enjoy a robust dinner once I’ve remembered the somewhat confusing order of operations (take a ticket, make an order, pay, eat).

The cafeteria in question. Apparently Soviet style dining is having a comeback. Certainly it is packed out at all hours of the day and night.

I had hoped this might be mushroom soup (it seems to be squash) but clearly my (now) 230 word vocabulary has some serious flaws. Still for $7 it would be churlish to complain. Sadly no beer. 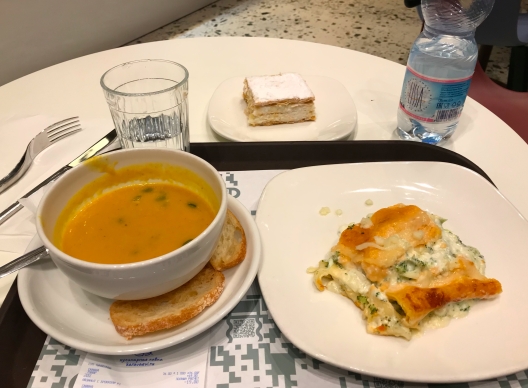 Moscow is a strolling city, but this morning, despite the 42° temperature, Muscovites, who would be out in force if it was 10° colder, are nowhere to be seen. Despite (or maybe because of) the lack of official interest in coronavirus at the airport (the guy supposed to be monitoring the heat camera was having a sandwich instead) citizens have evidently taken things into their own hands*. Certainly I detect no tourists.

This is usually take-a-number selfie central, today I have it to myself.

Hardly anyone is ploughing through the seriously melting ice at the skating rink in Gorky Park thereby making the extensive security, presumably to prevent us getting a free peek, somewhat superfluous.

No takers, only the wannabe Van Goghs themselves, outside the Tretyakov Gallery 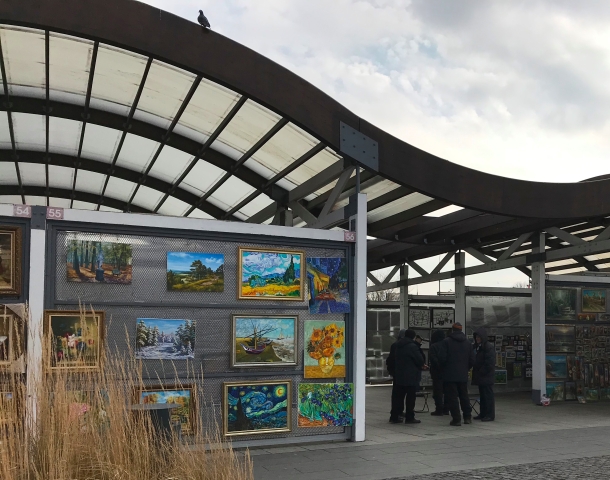 And the bulbs frantically elbowing their way into the sunlight have fewer admirers than they deserve at this time of year. 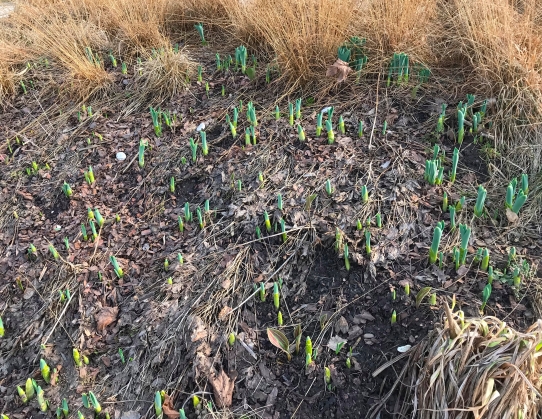 Even the Kremlin seems to be self-quarantining

And the faithful, who are usually lined up 10 deep for a fervent slobber are evidently praying at home.

Still the ultra-contemporary Garage museum doesn’t disappoint, despite its usual complement of alarmingly obscure exhibits you can always count on lunch. 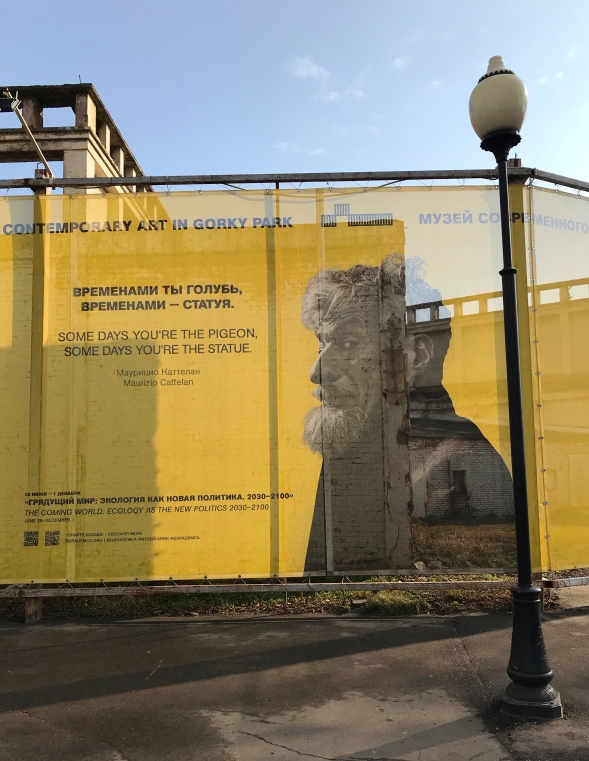 Six hours and 35,000 steps later I am deeply regretting my ambition, particularly because tomorrow entails an 8 hour flight (OK two 4 hour flights) to the coldest place on earth, where hopefully my appearance will seem more appropriate. Inexplicably, even though we set off at 1pm we don’t arrive until 5am the next day. And then immediately into the Taiga! Stay tuned in the unlikely event there’s (a) internet and (b) my phone doesn’t freeze.

*Reassuringly I later find that tout Moscow is hoovering up the bargains at Uniqlo.