I finally get my Pasternak moment on the 057 Irkutsk to (somewhere unpronounceable but way past Rostock on Don) when Lara parks herself opposite on bunk #11. Larissa is a dumpy, chunky babushka, but she is not grumpy! Not at all! In fact she’s so good-natured and charming that within 20 minutes she has us all wrapped round her little finger. Her week’s supply of food is deposited in the prodenitsa’s own fridge and the prodenitsa herself has cheerfully provided us both with real china plates and proper cutlery so Larissa can load them up with a delicious selection of home-made salads for our lunch.

Larissa will be on the train for a week. Fortunately she has brought food for a month

A few hours later and even the fierce Tajiks on the top bunks are happily showing us photos of their grape harvests. In a final coup de main on our morning constitutional she even has the train driver getting down from his compartment for a photo-op. 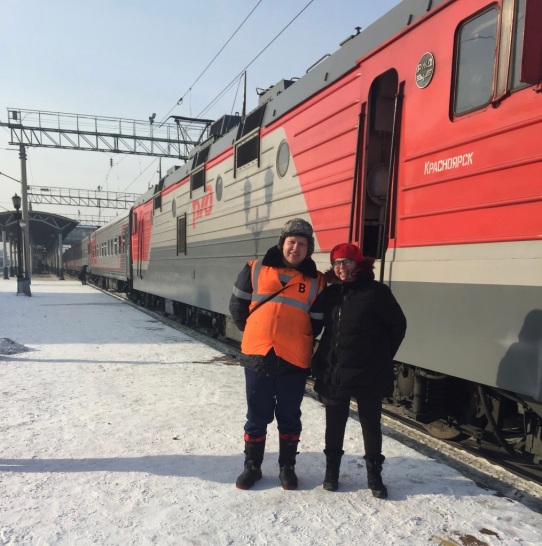 The most good-natured train driver in Russia

The sun is still sparkling on the taiga and our Google Translates remark simultaneously that it feels like spring. It is a lovely, if short, 30 hour train ride and we part, appropriately, with a heartfelt bear hug (she and the Tajiks head on to Rostock).

The bright blue skies make all the difference. Massive stands of trees try unsuccessfully to break the wind. 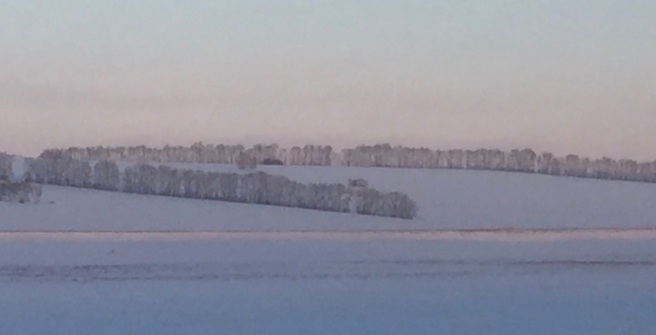 Spring is on its way to Novosibirsk too, so the grey film on the hard packed snow and ice that covers the sidewalks is beginning to melt treacherously. I am focusing on keeping my footing when it occurs to me the reason the air feels so balmy on my legs is that I’ve neglected to put my snow pants on top of my long underwear. Fortunately, Novosibirskians are far too polite to indicate they’ve noticed. My goal is some prep for Kazakhstan tomorrow: Scene, a bank. Cast: Me via Google Translate; A bank clerk.

Me: Is it possible to change Rubles into Tenge?

ABC: No. Do you have dollars?

Me: Oh! Is it possible to change Dollars into Tenge? 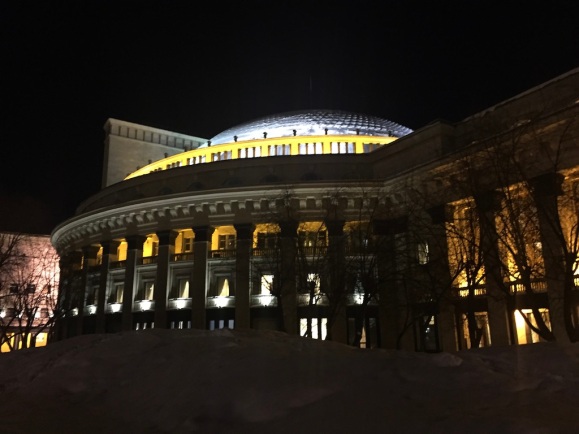 A night at the Novosibirsk Opera and Ballet to see Peer Gynt, in this modern iteration an  odd combination of both opera and ballet.  I would have preferred the piano and the chorus on stage and the dancers in the orchestra pit. But the acoustics were absolutely sensational, the best I’ve ever heard.  Caviar and champagne helps too.

All bets are off! The last stage of this marathon train expedition, a 48 hour, two night trip, will not be on one of the Russian Railways marvels I now so smugly consider myself expert in. The 369 from Novosibirsk to Tashkent stopping in Almaty Kazakhstan, is a decrepit Uzbekhi Railways imitation. Truth be told, it isn’t an imitation at all, but a slightly unhinged parallel universe.

Novosibirsk Railway Station. The palm trees are obscuring a grand piano. The pianist is playing Rachmaninoff.

Clue number one: most of the train is composed of open bunk ‘plazkart’ carriages to accommodate a full cohort of ‘importers’ laden down with plenty of who knows what (whatever it is they come by from time to time trying to sell it).  The single ‘kupe’ carriage of elite 4 berth compartments has an oriental rug, but is half empty.

All of the action is at the rear of the train which is packed full of ‘importers’. The sniffer dogs are very interested.

Clue number two: all the prodenistas are men, and none are prepared to deploy air freshener in the bathrooms or vacuum between our feet. No-one has a clipboard. After the border and when they have acquired enough who knows what from the ‘importers’ they let a subset sleep in the kupe carriage, though not, fortunately, in our compartment.

Our prodenista sports elaborate dental work and what looks like a military band uniform. He insists I take a picture of him with this dried-up pomegranate. Meanwhile his junior associate (glimpsed partially) cackles “No photos! No photos!” hysterically from the side. Neither of them prioritize cleaning the bathrooms.

The samovar is coal fired.

But bunk #9 will be cozy under the Uzbekhi railway blanket. Just as well since all the lights and heating fused on the second night.

Clue number three: there is no little elf with free dinners (how we laughed but how we miss him now) only a hulking great Uzbeki who tries to strong arm us into buying greasy plov on a 3 hour rotation. Ludmilla (Luda, this trip’s bunk #11) keeps up a whispered commentary on everything she disapproves of (it is constant) and manages to whisper him away but I make the mistake of saying ‘patom’ (‘later’) so he puts me and his rapidly congealing bowls on a half hour rotation. Google Translate is not effective in Uzbeki. 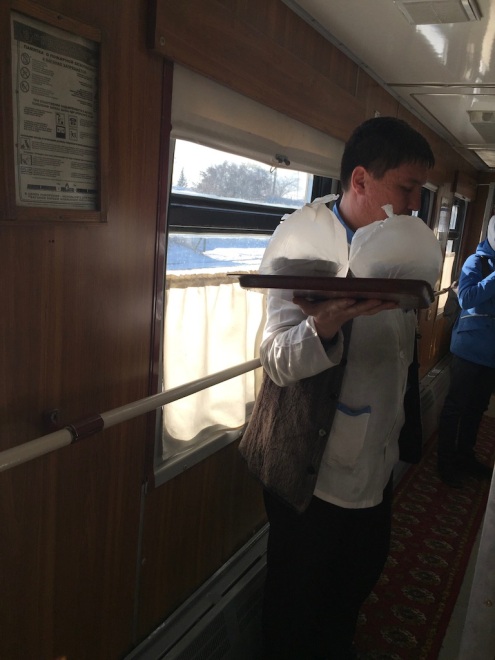 Plov extortion. Out of self defense I tried to figure out when it might be fresh and ordered then. I was wrong.

At just before 6am I am engaged in the daily ritual of calculating how long I can put off going to the bathroom when all lights come on and three different breeds of sniffer dogs expertly nose their way down the carriage, followed by 5 members of the Red Army Ensemble who align themselves beside my bunk. ‘Passport’ they chorus. They are so transfixed with last year’s Burmese visa they take the passport away, presumably to show the tenors. An hour or so later a trio with slightly better vocabulary demand my full itinerary in detail (they are visibly disappointed it won’t include Burma). I omit Iran and substitute Istanbul as an imaginary final leg but It doesn’t help. Finally, and after another hour, a well-scrubbed millennial with perfect English (of course) presents me with my passport, inexplicably freezing cold, ‘I’m so sorry’ he says unexpectedly. ‘It’s quite all right’ I tell him. Of course, we’re stopped, so the bathroom is locked.

But all is not done. The Kazakh half of the equation awaits. Its single military representative, while decidedly spottier and much less spruced up than the RAE has several more lights on. He immediately spots my proffered UK passport lacks the Russian exit visa (the dilemma – my Iranian visa, which I’m going to pick up in Almaty, will go in my UK passport, so I need my Kazakh visa there also, but my Russian visa is in my US passport). I surrender my US passport reluctantly (I have not yet made it to the bathroom). ‘Two passports?’ he asks. ‘Yes’ I concede. He immediately stamps the appropriate one. ‘Welcome to Kazakhstan’ he says with a grin.

By the time it gets light we are into the steppe. The horizon is flat in all directions and will stay that way until nightfall, 12 hours away. We stop at one tiny town and see only a handful of isolated villages, all beside the tracks. Their houses feel braced into the landscape. 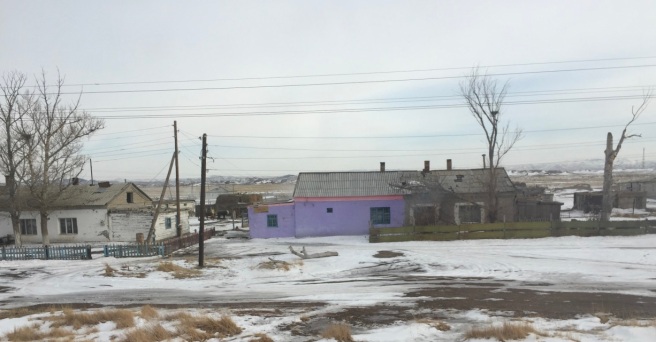 An unusual blast of color.

There are no full size trees. Only the wind has sliced and etched huge swirls in the snow, which, caked with ice, glisten in the sun. 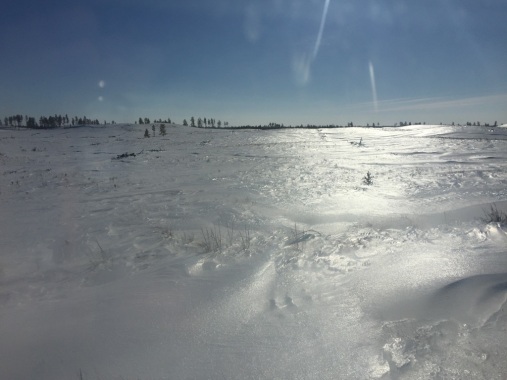 I had thought the landscape would be scarred with Soviet mines, but it is not. It is pristine; harsh and majestic.

The graveyard at the end of the world

I idly follow some snowmobile tracks as they meander out of a village and beside the railway for over an hour. Along with the electricity poles they end up at a single farmstead. There are no other tracks or electricity poles as far as the eye can see. 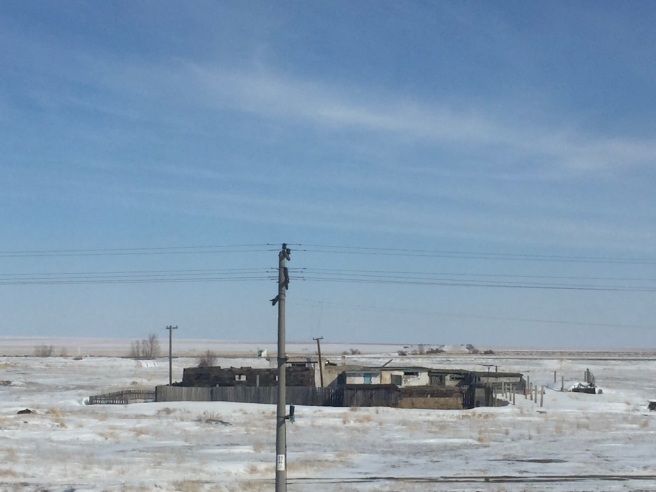 Outside the farmstead a young boy without gloves is hauling a steel milk can on a sled. He stops to wave at the train, which passes this way three times a week.

Unusually at dawn a far house-light.