Luang Prabang! Let’s hear it for the redoubtable French who, happening on a dinky little fishing village at the confluence of three rivers (the Mekong being one, the other two being unpronounceable) re-imagined it a glorious monument to Indochine architecture, or at least a perfectly lovely little riverside town with stunning photo-ops on every corner.

Let’s also hear it for the Lao who, when the French were ‘encouraged’ to leave in the 1950s didn’t immediately sashay into town with dire paint and garish fairy lights, but evidently tiptoed away, quietly locking the doors, allowing the dust to settle on the gramophone in the bar, the bougainvillea to drape itself with increasing exuberance everywhere and the bromeliads to colonize every possible vertical surface.

Let’s finally hear it for our regional fairy godmother UNESCO, who came bustling into town forcing the dust to be dusted, the drains to be fixed, the internet to be available and the gramophones to be wound up so we can all enjoy the party. Here we are then, at the wonderful Maison Dalabua, where the rooms are fetchingly distributed among UNESCO-monitored lily ponds, chock a block with all the tropical horticulture a heart could desire (plus orchids), a gourmet restaurant within spitting distance and a swimming pool right off our terrace, and all for $40 a night.

For unlike the Vietnamese who confront the same opportunity by charging $2 for dinner, but then need to feed 100 to make ends meet, the canny Lao charge $20 and thus only need to feed 10, plus the rancid backpackers are frozen out (they are bitter and try to retaliate by spreading the canard that Luang Prabang has become a theme park; to which we say Pshaw! there’s a reason we vacation in the Marais and not the Banlieu). So not only does everyone smell better and are better fed, but we are all happy and the Lao can slope off early to finish converting their bamboo huts into French colonial facsimiles, which is what everyone was doing during our bike ride around the countryside yesterday.

Yesterday has made it clear that venturing much further afield will not be feasible by road (only one road is paved and the rest are so pitted and stony it took us 2 hours to cycle 5 kilometers on our horrible hotel bikes), so we have engaged the cheery Mr. Phet. Mr. Phet does not require a French colonial bungalow because together with his wife and son, he lives on the boat we have hired for the day. Fortunately for us 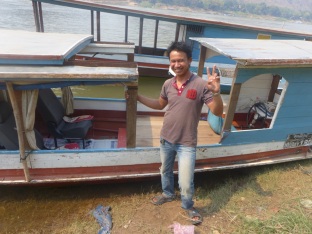 they are both away (she to teach high school, Phet Jr. to advance his primary education) and so he and his home are at our disposal. Our goal is the Buddha caves a convenient 2-hour trip up the Mekong (only 1 hour on return since we don’t have to fight the current). En route Mr. Phet not only introduces us to some of the le vrai Lao in the riverside villages but also delivers a sardonic primer on Laotian politics over his right shoulder (we inadvertently opened the floodgates by inquiring who could afford to build the staggeringly vast riverside palaises on the Luang Prabang outskirts). Not only are we treated to a discourse on the entire spectrum of government graft, but we learn that the omnipresent ticket collectors enjoy patronage positions uncannily like those on the Mass. Pike. Plus ça change. 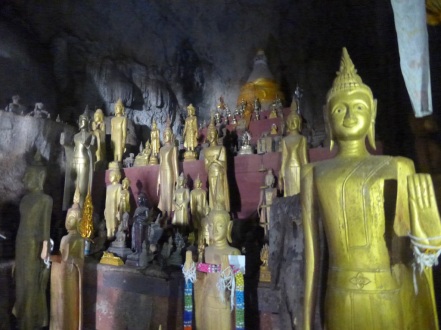 Mr. Phet also tells us that he was a Buddhist monk for 4 years, and finally I get the chance to put my observations of monks in all 4 SE Asian countries into context: I have identified 2 distinct flavors – the professionals look stern, even austere. Unless they are shopping for ‘Buddhist monk gift sets’ (to be found in all the major Thai malls and providing all sorts of laundry and personal hygiene products done out in a fetching shade of saffron) they never laugh. Professional Buddhist monks often seem to be praying (In Burma they are always praying, but there again so is everyone else, particularly the flag-men on the railway, which was especially disconcerting at the viaduct and going down the mountain). In contrast, the 2nd flavor – teenage/milenials – are most likely to be checking 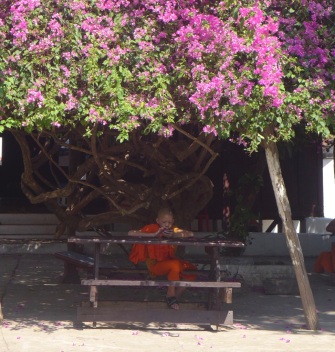 Facebook on their cell phones; the thought of prayer has clearly never entered their minds. Mr. Phet tells us that parents who either can’t afford to pay for education or prefer to invest their resources elsewhere can rid themselves of their obnoxious teenage dude offspring for a few years by putting them in the monastery (opportunities for mean girl daughters also exist but they are less abundant). It occurs to me that we might be in a different place now if Mrs. Trump (mère) had had the opportunity to shave her son’s head dress him up in a silly orange sheet and have him get up at 4 o’clock in the morning to go and beg for his food in his bare feet. As SE Asia seems to prove, four years of that every day is entirely sufficient to rout out any dude-like tendencies in any male, alpha or otherwise.