There comes a time in every trip when the mere thought of an outing to yet another spectacular UNESCO world heritage pagoda elicits only a slight narrowing of the eyes.

Inle lake, with no historical significance other than the old ladies selling odd vegetables at the market, is perfect for a few days off, and I couldn’t ask for a better place to put my feet up than the Yar Pyae, where it feels like I’ve got the best room in the house – a corner with two big windows and a balcony, conveniently near the rooftop bar, so the nice old man who brings hot water for tea or beer is only a wave away. So, in between the tea, the beer, my book and the domestic dramas across the street I find myself so much revitalized that the next day I can commit to a desultory bike ride around the lake for a lounge in the hot springs. By the time I’ve polished off two mojitos and a fish curry I’m fully restored.

Just as well. My boatman has sent word to be ready and waiting at 7:15 and luckily I am because at 7:16 he’s already hoofing off to the jetty with me in hot pursuit. Considering he has organized a full 9 hours on the lake and what we’re going to see has been in full swing for hundreds of years the reason for this rush is not at all clear.

We poke along the highways and byways of the lake (they look like nothing more than the canals of Venice) in his wooden longboat (with an outboard motor but steered by standing on the back exactly like a gondola) in and out of villages on stilts, where we see the school run being enacted in

dugout canoes (aggressive double parkers are found in all cultures) through floating farms (built on mats of water hyacinths and weeded from the same dugout canoes via an awkward sideways motion) and into weekly markets (more old women and even odder vegetables plus staggering amounts of exquisite indigenous crafts that leave me paralyzed with indecision as usual) as well as the rickety workshops where the crafts originate. Perfect warm hazy weather. A tour de force, and it goes without saying, also a UNESCO site. 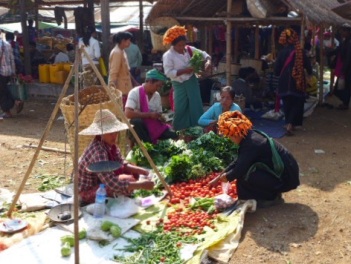 With only one day left to figure out how to avoid that bus ride down the mountain while arriving in Yangon in time for my flight to Hanoi, plans have still not coalesced.

Plan A avoids the bus with a world-class train ride from Inle to Thazi a mere 100 km (but 11 hours) away. Thazi to Yangon – less clear. The original train does go on to Yangon but is particularly old, rickety, slow and without sleepers. It arrives in Yangon after another 17 hours – not so appealing. However, while this train is stopped in Thazi the bona-fide Mandalay-Yangon ‘express’ (with sleepers and much faster) passes through with a 5-minute stopover. Provided we have arrived in Thazi on time (most people are deeply skeptical this can happen) it should be possible to transfer to the express. However, no-one – and this includes the station master at the Inle lake station – knows whether the station master at Thazi is allowed to write a ticket for the Mandalay-Yangon express. In fact, since all tickets are handwritten, it seems highly unlikely, how on earth would he know what seats are taken already? Even the ‘Man in seat 61’ that definitive source of information for train transport worldwide asks somewhat plaintively “please let us know any updates on the Thazi-Yangon situation”.

As for a bus from Thazi to Yangon (flatter and therefore less hair-raising) the internet can only come up with helpful hints such as ‘On the train I ask an uncle and he send me to [place that is clearly lost in translation since it can’t be found on Google]. I wait on the road and at 10pm bus comes’ which doesn’t sound like a solid strategy. It should be said that the one tour office in Inle that claims to have international status does believe such a bus exists, although they can give me no concrete details of where it might stop in the middle of the night. So, in the (seemingly likely) event I am stuck overnight in Thazi, I have the option of either the ‘Moonlight’ or the ‘Amazing’ guesthouse, both of which are characterized by (usually overly optimistic) websites as ‘Rooms not up to much but very friendly’. Moreover, they will happily send their ox-carts to pick me up at the station.