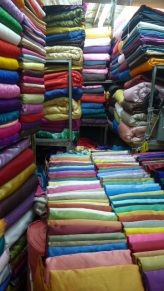 Last day in Yangon, and the unnecessary complications with my Vietnam visa have been cleared up so I can turn my attention to some final souvenir shopping. The hotter than hell index is well over a 10, so a taxi is in order. Alas, the market is soundly shuttered and padlocked. ‘It’s closed’ I observe. ‘Yes’, agrees Mr. Anadeh my taxi driver sadly ‘always closed Monday’. Our 5-word limit prevents me continuing the conversation to its obvious conclusion, but fortunately his wife saves the day by cell phone, instructing him how to get me to where the artisans actually make the stuff.

My guys at the ‘No Pornography Inn’ have more on their minds than where packaging supplies can be obtained and can only feebly suggest the market; nevertheless against all odds a package does materialize, and I am instructed how to tell the next taxi driver ‘Post Office’ in Burmese.

Miraculously, since its Monday, the ‘Pôt Offee’ is neither shuttered nor padlocked. Indeed, it is an impressive remnant of the Raj with ineffectual fans on the 30 foot ceilings stirring the air around the abundance of carved stone pillars and along the dusty marble floors. As only to be expected there are fully 5 International Parcel desks, but less expected since it is only 1:15 and Pôt Offee’ is advertised as open until 6:00, no customers. ‘Close 12:30’ the man behind desk says firmly ‘Custom go home’ and both he and the battleaxes in the Greek chorus at Desks 2-5 turn on the classic 1000-yard stare perfected by bureaucrats everywhere.

I decide to go down fighting and burst into tears.  ‘What will I do I?’ I wail loudly and pitifully eliciting great interest from Domestic Packages. Let it be said that in any self- respecting Western totalitarian society this rather obvious strategy would indicate that battle had been engaged, but would not be sufficient per se to induce any actual reaction. Surprisingly, Desks 1-5 quite literally blink, refocus their eyes and leap to attention. Turns out, of course, that Customs is in fact standing right behind me eating a snack. She hauls my package onto her head and we traipse around the corner to another Raj behemoth where her boss immediately deconstructs it. ‘Ancient?’ she pounces accusingly on some Buddhist mantra I was coerced into buying at yet another pagoda ‘Not at that price’ I parry and we’re soon done. Junior Customs shoulders it up again, and the crew at the Pôt repack it into an official box with official tape and then handily sew it into an official burlap sack.

‘Surface or air?’ I ask. ‘Only air’ he says, and smiles sardonically, clearly having read the Lonely Planet’s opinion of Myanmar Mail.