Its hideous aesthetic confirms that the Kyaung Mint hotel was conceived with the Chinese tourist in mind. Less easy to spot than in Japan, where they are notable for hauling around massive amounts of luggage to fill while shopping till they drop, they nonetheless are the major tourist bloc in northern Burma. Unfortunately, the Chinese tourist is a tough nut to crack. A relentless eye for a deal and a non-stop stream of demands pushes prices down and forces management to pile on the amenities (who heard of a $20 hotel with a king-sized bed, minibar, free coffee, full range of toiletries and bathrobes). No wonder management has turned westward, to European guests (French and Germans needy in their own way, no Americans) pathetically thankful for the opulence even as they avert their eyes from the décor. I have already wormed my way into the manager’s good books by taking the bike he provided (free of charge) for major surgery on the pedals. Now it actually works, I am allowed to reserve for my own use in a special corner.

It is said that everyone has their mind’s eye Mandalay, so the reality inevitably disappoints. I am inclined to disagree. While arriving at the Shwedagon by taxi felt like a pilgrimage, a bike ride around the neighborhood pagodas allows ample opportunity to ferret out le vrai Mandalay, alive and well in the bustling side lanes and alleys. 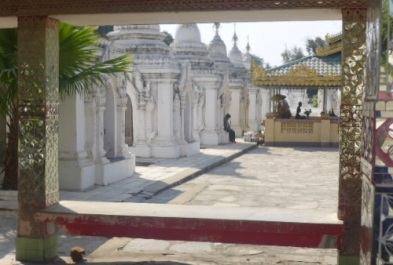 In the event, I find one of them from the guidebook (the whole Tipitaka inscribed onto 1794 stone tablets each in its own little house!), stumble on the second, which has been mislabeled on the map (massively carved teak, ladies not allowed into the inner chamber).

I completely fail to find the third, in large part because people who have clearly been born and bred in the vicinity seem to have no idea of what the streets they live in are called. Let it be noted that the streets are labeled, 1st 2nd 3rd etc.; the pagoda in question was supposed to be on 86th, which is pronounced in Burmese as “Eighty sixth”.

My final foray is to the inevitable pagodas of Mandalay Hill, which deliver superb views of the sunset over the distant Irawaddy river. Not so fast! As I am locking up the bike I am accosted by an old man in a jungle war helmet, complete with netting. ‘Mama, Mama too late!’ He tells me brandishing his iphone as proof. Evidently sunset will occur in precisely 30 minutes, while the climb up the hill will take 45. Although I find this somewhat surprising since I too checked with Google, I do tend to agree that reaching the top breathless and in the dark, would be unfortunate. His proposed solution is to ferry me up post haste on the back of his somewhat underpowered motorcycle and wait until I finish photographing all the other tourists who will be blocking the view. My experiences with Myanmar’s robust traffic have made me apprehensive to try a motorcycle taxi, but this more controlled environment seems like a perfect opportunity. I put on a (more conventional) helmet, sling my leg over the back (to general disapproval; women generally ride side saddle) grab him firmly by the right shoulder as etiquette demands, and implore him to go slowly.

We go so slowly the sun is beginning to dip into the horizon as we make it to the top.