The Amyru Darya river delta takes the edge off the harshness of the Kyzylkum and Karakum deserts that sandwich Khiva, the last intact Silk Road town. Agriculture is possible and since it is now officially spring any field not yet washed with a fuzz of green is rapidly acquiring precision furrows. Grumpy old men and their hyper-focused bandy legged wives provide most of the action while grandchildren resolutely shirk their responsibilities: Sulky teenage girls stare off into the distance, longing for a better present, a different future; younger brothers, kick balls or each other, neither use nor ornament.

The sheer romantic impact of the vast adobe mud walls, here since the 5th century, is marred somewhat by a pervasive and alarming smell of gas (A Turkmenistani engineer staying at my B & B explains the rather ad hoc appropriation of domestic gas from the over ground main line encircling the town (seen in the photo); his wife and I open our windows before we go to sleep). The rich remnants of 600 years of Islamic architecture are solid evidence of Khiva’s significance well into the 19th century.

Layers of history at the in-town necropolis.

Except that Khiva is not quite what it seems: We are seeing the fruits of the rigorous Soviet renovation that shored up the buildings while divesting the nearly 100 (each) of mosques and medressas of their religious roles. 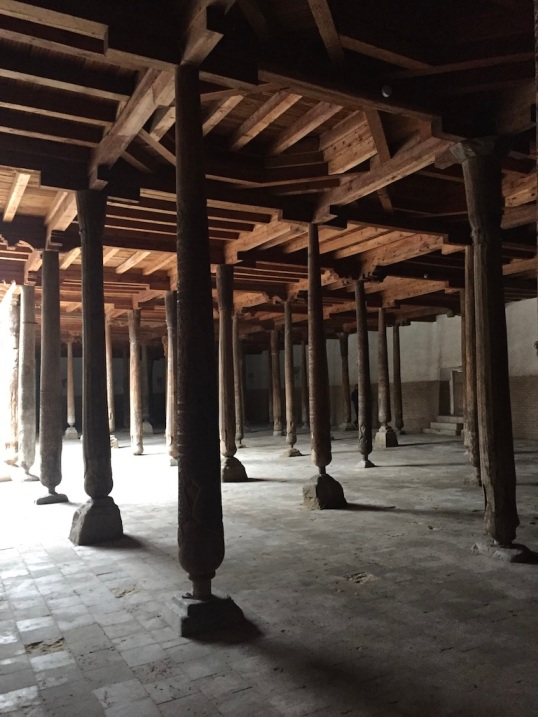 Some 10th century columns are still standing, the others are renovations. We can tell because the older columns were soaked in chicken shit for 5 years to smooth the wood. The Russians didn’t bother.

Still, the citizens adapted and even though the Soviets are long gone the call to prayer remains anemic.

But Khiva has its eye on the future as well as the past. A quick sortie outside the East Gate (in search of crackers, my single line of defense against the ubiquitous fatty food) reveals a bomb site. 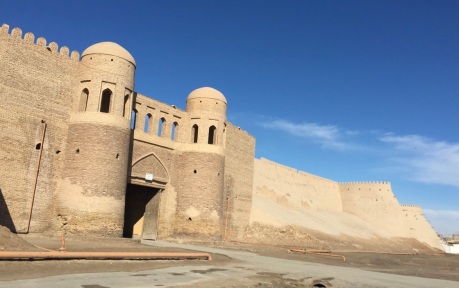 The East gate with gas line 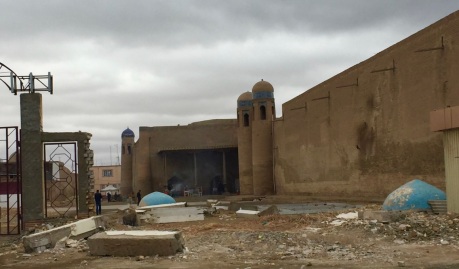 The future is being planned outside the walls

Madame and daughter of the cracker shop.

More iconic views of Khiva, first from my hotel roof 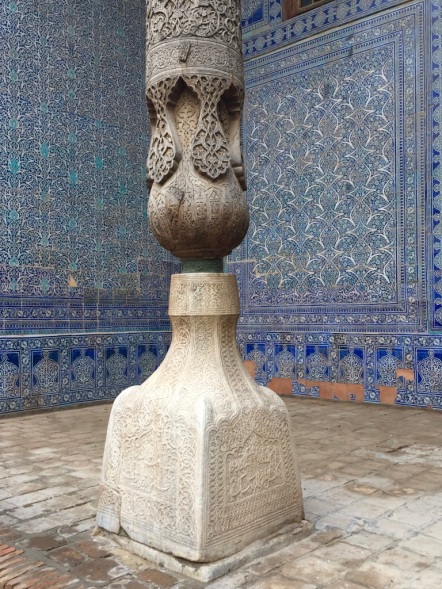 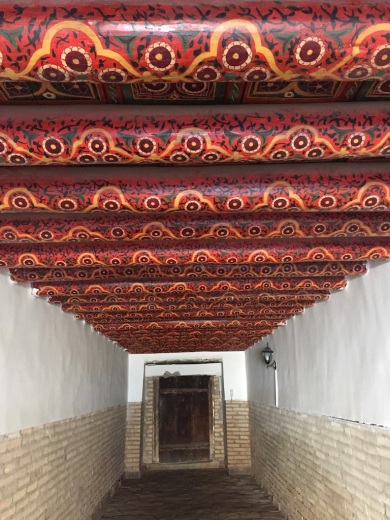 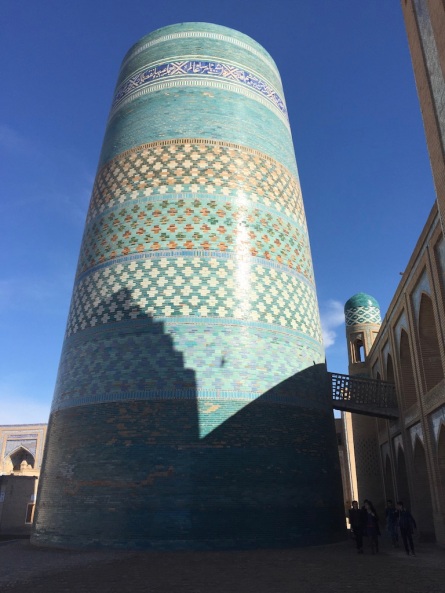 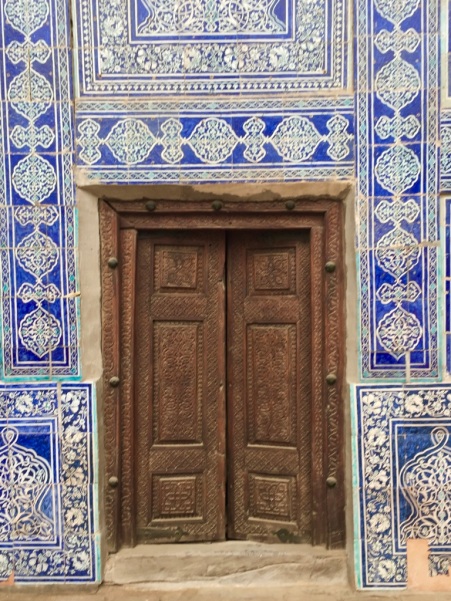 ‘Three coins in the fountain’ is a different proposition when all the currency is in notes. 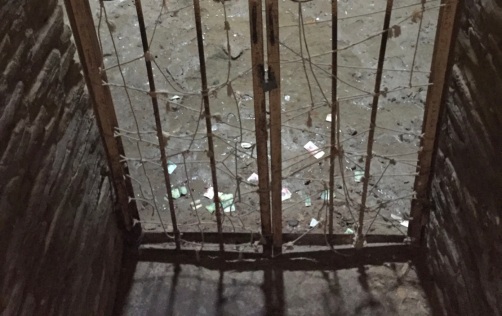 The museums are always vaguely disappointing

Inquiries to the millenial-behind-the-desk reveals big plans for the future – a new bazaar! (the current one is a mere shadow of its Silk Road self although when I hear a Russian guide tell his group “Don’t buy anything it’s all made in China” it feels like plus ça change); more hotels! (land can’t be bought and sold inside the old city, only inherited, and most inhabitants it seems are content with their cows and sheep, at least for now); a fast train! (2 hours instead of 18 from Tashkent is coming this year already). Khiva clearly has theme park aspirations.

Hotel Zukhro’s milenial at the desk (the heir apparent) is only 14 but already has well formed social opinions. He will go to Korea to study English at university, while his sister will stay confined to the house. At breakfast I learn she has other plans.

These book stands are still made on site. The master, Hasan Bey, can trace his ancestry through 18 generations. He shows me how they’re carved from a single piece of wood and insists I take a video of how they can be opened (nine ways).

I swear though, Uzbekis are the chat masters of the universe! No sooner are they all sat down than  favorite stories are brought out to rapt attention and just the right quota of encouraging questions. A long train journey is the perfect crucible and this one is my last overnight of the trip from Khiva to Samarkand (the worst possible, I failed to notice we only stop briefly and at the ungodly hour of 2:45am – it will be impossible to sleep soundly).

My compartment mates  – a nice young cardiologist who is a dead ringer for a young Barack Obama, and an enormous old guy with a full set of gold teeth who prays enthusiastically as soon as he sits down but then puts away his hat and pretensions for the duration) and the inevitable shy Tajik on the top bunk are soon frustrated by our lack of shared words (Google translate [and the internet] gives up half an hour after departure as usual, just when the cardiologist has used it to announce ‘I am Mexican’ to everyone’s confusion). 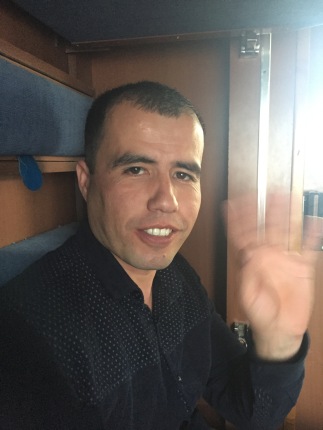 My fat friend saved our bacon with dinner (so to speak) but refuses to open his mouth for the photo op so his magnificent dental work goes unreported. 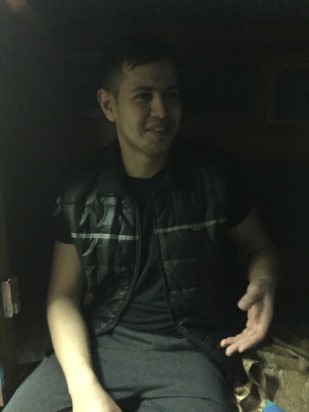 We are saved by the appearance of ‘Russell’ the milenial (of course) a student of finance at Singapore University with aspirations to a distinguished career at Goldman Sachs. He speaks impeccable English. As soon as news of a bona fide translator spreads, the compartment floods with inquiring minds. It is standing room only and I am forced to become an expert on both Western Europe and the Americas. We segue from economics to politics to soccer (briefly) and on to medical horror stories. Poor Russell is run ragged for 6 hours with a brief break for dinner (hard boiled eggs from the Tajik, bread and delicious sausage from fatty, tea from Barack Obama, cookies supplied by me) before we all collapse with exhaustion. I get up quietly at 2:30 and at 2:40 fatty lumbers up from his bunk opposite and insists on carrying my luggage the 20 feet to the carriage door. He has put on his hat so he can bless my travels.